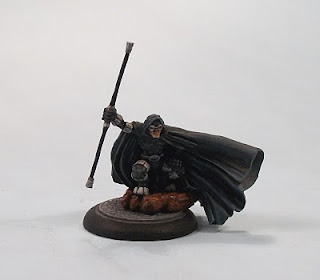 For some Heroes their new lives are shaped by the pain of tragedy, while others are called to the fight against evil by their own personal crusades. A very rare few can say their new lives as heroes began simply because they were there.

Skyline was one of the joint Supreme Genesis 2 winners, and very much takes a 'rooftop vigilante' theme to match Jade Hawk, his unofficial companion mini (and box mate).

I loved this James Van Schaik-sculpted mini from the moment I saw it, but I was wary about how to tackle it because of one major thing; the model is supplied with a massive grotesque on which it sits ordinarily. However, that did not fit with my attempt to make most of my bases 'street side' in nature. Therefore I had to work out how to mount Skyline onto a base while allowing for the sweep of his cape. What I settled on was cobbling-together a base from Fenris with some broken brick wall (also Fenris) which gave just enough lift. 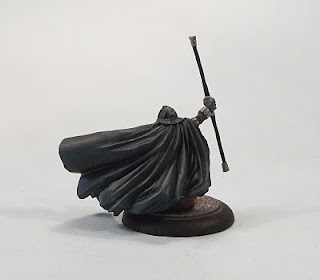 The colour scheme was intended to sit easily with that of Jade Hawk without being identical (they are not official partners after all); it is very dark being predominantly dark grey and dark sea green. I am pleased at that as it seems fitting for a night-prowling vigilante.

Eventually I plan to do another mounted on the accompanying grotesque with Jade Hawk similarly mounted, but basically as a display piece only.
Posted by pulpcitizen at 07:16