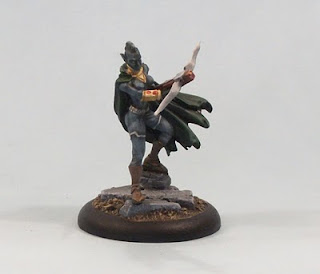 Alien goddess of vengeance who makes it to Earth just before the next Ulthar invasion. With each fallen Ulthar and new Supreme ally gained she is closer to her goal - overthrowing the evil patriarchal empire that enslaved all of the Ulthar females.

Virgo is a special kind of Ulthar - she is a rebel and so cannot used alongside any other Ulthar. Despite that as a Hero/Villain she can be fielded in Teams from either Faction. Furthermore, when Dark Solar appears she will offer a valuable option to a Hero or villain player wanting to exploit Dark Solar's special Team Power.

With very good range and Energy Trump Trait, Virgo can fulfill a role as a kind of 'sniper', yet has Actions and Skills that aid her in Close Combat; so no 'glass hammer' here then. She won't stand up long against a dedicated brawler, but she will do a good job if used in her specialised role. 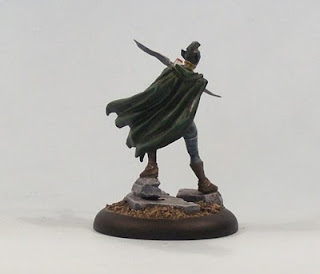 With this mini I wanted a palette that was removed from what I use for my other Ulthar. The only commonalities are the flesh colour and the basing - the base is from the same range. I thought I'd go for colours that could represent a more sneaky type of character, and in hindsight probably should have chosen a different colour for the cape, but overall I am fairly pleased with the outcome.
Posted by pulpcitizen at 07:29