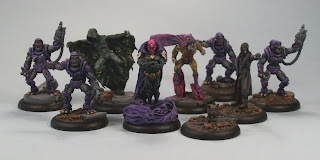 Following on from the Forgotten, the Necroplane.

Invaders from another realm, the Necroplane harvest life energy to drive their machinations forwards.

A growing collection of Supremes and Minions, they are (left to right):