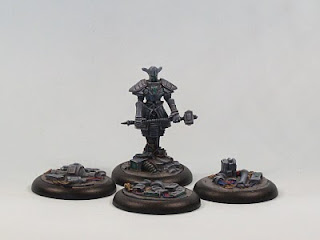 C.O.R.E.: Conscious Omnipotent Replicated Entity. Its pursuit of a new lawful and compassionate order attracted a lot of following and when more and more of Supremes pledged their allegiance to C.O.R.E.'s crusade against all-things-evil, the birth of Heavy Metal team was imminent.

C.O.R.E. is the leader of Heavy Metal, and one of the few Level 3 Supremes available so far. He is versatile and powerful (with an attack that can be extended as far as 18" at the cost of a lot of AP), and he shouldn't lose many Starting Rolls. That versatility extends further to the upgrade he offers Heavy Metal Team members using Ranged Combat Actions: Lady Cyburn and Nuclear Jones especially benefit here, allowing some decent sniping between the Actions available to the 3 Supremes. 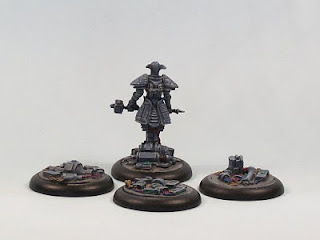 Given that Dr Mercury offers buffs for the whole Team, I think he is almost mandatory in a Heavy Metal Team using C.O.R.E. (Encounter Level 12 and above). In fact my ideal Heavy Metal Team at EL 12+ right now would probably see Captain Hadron or Iron Train relegated to last choice, with Iron Train edging things (therefore comprising C.O.R.E., Dr Mercury, Nuclear Jones, Iron Train, Chronin, Lady Cyburn & Androida; no need for a Merc like Gentleman to fill out ranks here).

I put off painting C.O.R.E. for quite some time as I am still trying to improve my NMM techniques. I still have a long way to go, but I think he looks reasonably effective. Eagle-eyed readers may spot that he does incorporate the red-blue colour motif I have used on many of my heroes, even if only in a small way.

The small Tokens around him are his Access Points; these resources are used like remote Exclusive Minions that are static, but have various defensive and offensive upgrade options. They also allow C.O.R.E. to use his Download* action to travel instantly across the board to be in Base to Base with an Access Point.
Posted by pulpcitizen at 06:40