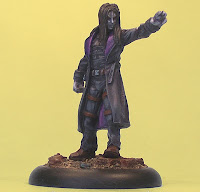 BRIEF: Classic comic book vampire, Sanguine (Day) is great in games in which you expect to face a lot of ‘grunt’ Minions – the faceless Non-Exclusive types.

Bloodarang is a great ranged attack for its AP cost; with luck (or at least favorable circumstances) multiple models can be affected. Given Sanguine’s STRENGTH, that may be the only real weakness of the ability, meaning it is best targeted at weakened Supremes (Knocked Down or subject to Horror below), those with low AGILITY (a lot of bricks qualify) or Minions. And of course Minions count as models for gaining Night Points…

Blood Favor is a nifty support ability – healing for Necroplane models (useful for keeping Mourn in the game when he is off on his own, or topping up Supreme Zed’s first Damage track to avoid his effective Elimination if counting win conditions on Supreme Levels. Therefore, some end-game planning can be useful for the final Round with this ability if Sanguine is still in play.

Whisper can be used to turn opposing Minions; it can also be used for cheap Night Points gain if directed at Sanguine’s own Minions. Look at Corrupt Cops, Hired Guns or ‘weak’ BOOM Minions in good numbers to exploit this. You will need to cluster around Sanguine and you will limit the effectiveness of those Minions, but if you are determined that you need the shift to Level 2 Sanguine, this is possibly the quickest route.

Horror is potentially very powerful, applying -2 to all opposed rolls. In the right circumstances this is a really big penalty (and so a bonus for Sanguine’s Team). And don’t forget that SBl 4 can cover a large amount of the board (basically just over 9” in diameter circle). Follow it up with Bloodarang and you can hopefully add some more Night Points; using the Horror itself is not often likely to yield extra Night Points, but it can create favorable circumstances to do so.

Team Power – Night Beckons: not much to consider here really, except to not overlook that with Fury 1 there are a couple of other options for Sanguine to take out Minions for cheap Night Points.

Skills – with his STRENGTH 3 Fury 1 is really for weak DEFENSE Supremes and especially Minions. Freelancer is more a Team-building skill, deciding for you what kind of Team you want to build, and really influencing use in EL 12 games.

Draku – don’t leave home without him! He is cute, a vampire dog, Regenerates and best of all your opponent suffers if he or she takes him out. What isn’t there to like in all of that?

WEAKNESSES: While well-rounded, Sanguine (day) offers no immediate devastating Trump-based attacks, instead offering attack synergies. Therefore, to use him effectively requires fore-thought and planning – Horror stacks well with anything that follows, including Sanguine’s own attacks, so it is worth using as early as possible in the Round.

SYNERGIES: With Horror, all of Sanguine’s Team can benefit from its use, and so Sanguine works well alongside anyone. Blood Favor requires that Sanguine is working with Necroplane Supremes, so at less than EL 12 you are specifically looking at Mourn to be able to fully utilize it.
Posted by pulpcitizen at 04:48