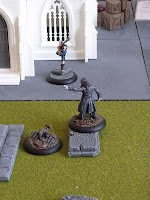 I played two games of Pulp City today, against my main gaming buddy Rob. We played according to victory conditions that will be in the new rulebook when it appears, and I have to say I was thoroughly and truly beaten in both games!

Rob kept his eye on the victory conditions and so played effectively and efficiently. In the first game Rob seized the initiative by claiming the objective first, meaning I was on the back foot, since to win I had to grab it back and move it (picture above features a brave Vigilante facing off against Sanguine and Draku; photograph courtesy of Rob). 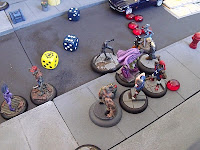 I became too focused with trying to take out one of his key models out in the second game (photo right, courtesy of Rob), only to lose most of my own Team in short order. I'll do a Battle Report in the next couple of weeks about that one. Rob played well and to the objectives in both games, and that is why he won so comprehensively. I'll get him next time! 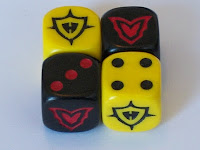 On the upside, I had a postal delivery arrive between games: see the picture to the right for examples of my new 'Pulp City' themed custom-dice. They were made by EM 4, and I had them done after seeking permission from Pulp Monsters to do so. I am chuffed to have them.
Posted by pulpcitizen at 09:56