Uncle Sam and the Freedom Fighters 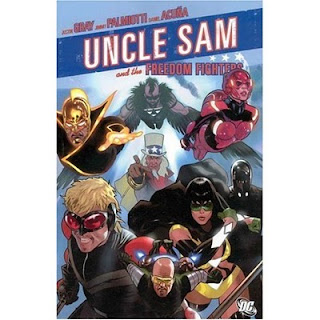 This post was provoked by news of a new series coming out later in the year from DC Comics, Uncle Sam and the Freedom Fighters. An ongoing series, it is set to be a continuation of two previous limited series, so I decided to re-read both.

The Freedom Fighters is a DC concept that has a history stretching back over 35 years, built on a stable of characters acquired form another publisher (Quality Comics), and in recent DC fashion, has been used as fodder in various reimaginings and worse, 'big events'. As readers may know from my previous posts, I am not a fan of the current focus on 'big events'. One of the reasons is that the top tier characters are kept safe by and large (even if temporarily this does not appear to be the case), whilst the second and their tier characters are often mangled and disposed of, frequently for shock value alone it seems; and such has been the fate of the Freedom Fighters at various times.

The first iteration lasted for more than a decade, largely as a background concept set on one of DC's many Earths of their multiverse. Crisis on Infinite Earths took away their raison d'etre, thus they fell by the wayside. Cut to 2000 and a team comprising old members and new iterations of others surfaced, only to be summarily dispatched a few years later in Infinite Crisis. A year or so later and the next version arrived - Uncle Sam and the Freedom Fighters, spinning on from the arguable mess of a series that was Battle for Bludhaven, which was part of the bigger mess (in my opinion) that was Infinite Crisis.

So cut to the recent history of the team: Uncle Sam and the Freedom Fighters (USatFF) (written by Justin Gray and Jimmy Palmiotti; art by Daniel Acuna) was spun out of a DC special called Brave New World, a kind of post-Infinite Crisis restart for a lot of characters, and ran for 8 issues from 2006-7. USatFF is an interesting book for me, taking as it does a very political stance to it's plots and sub-plots, not something I have normally associated with DC as a publisher. It is a story that is primarily focused on the efforts of USatFF to oppose a threat within the US government, as well as within homeland security. Themes touched on are politics, celebrity, freedom, necessity of actions for the greater good, and more besides. What we get is a book of a type that DC doesn't often publish.

The central plot is all about trying to stop specific machinations at the highest levels of power, an attempt to subjugate the American people, and the political themes are ever-present. The political angles may lack nuance and subtlety, but then this book was never intended as the superhero equivalent of the West Wing, and so that is a harsh criticism held by some in my view. The political stances are adequate to the story at hand in my opinion. The dialogue is often in service of the various stances that the individual characters hold, but again this felt right to me, suitable for the overall tone of the book.

I loved this series when it came out, and it is one that has borne several re-readings for me. I have read mixed reviews, most praising the art and many attacking the writing, but it is a story I found to be enjoyable, although there are weaknesses (for example, Sam eschews fatal violence against his foes, yet there are frequent such actions by his team-mates). On the whole a story I found to be engagingly-written and nicely rendered by Daniel Acuna who uses a type of computer painted art.

The cast is varied and each character has a distinct role and voice. My favourite is probably Firebrand, arguably one of the weakest in terms of raw power, yet determined nonetheless. And Uncle Sam is just great, basically the kindly straight-talkin' uncle-figure with vast power and a great set of values. The villain of the piece - Father Time - is a classic character who I really want to see more of in the DCU.

In the story we get introduced and reintroduced to a new cast with a lot of legacy code-names (numbers in parenthesis indicate what iteration of a given character we are dealing with:
Uncle Sam (I) - the spirit of the American people, reborn in the healing waters of the Mississippi River.
Firebrand (IV) - libertarian, agitator and Sam's 'herald'.
Human Bomb (II) - unfortunate scientists co-opted by SHADE, who joins Uncle Sam.
Doll Man (II) - miniature super-soldier, SHADE operative who joins Uncle Sam.
Phantom Lady (III) - addiction-influenced media starlet and superheroine, SHADE operative who joins Uncle Sam.
Red Bee (II) - young scientist who yearns to be a heroine.
The Ray (II & III) one is a self-serving SHADE operative who joins Uncle Sam, his predecessor a hero with a few years under his own belt and part of the previous incarnation of the team.
Black Condor (III) - an avatar of the elements of earth and sky, a man serious in his duty as protector.
Invisible Hood (II) a somewhat reluctant legacy hero.
Miss America (I) a golden age heroine returned when her country needs her most.

It was reported that the writers (Justin Gray and Jimmy Palmiotti) wrote the story loosely based on notes by Grant Morrison - this is something I can see, that there are faint echoes of his work on JLA, which in my view is no bad thing: mainstream superheroics meets 'big ideas', something Morrison and Mark Millar seem to have cornered a market on, and territory that I feel Gray and Palmiotti succeeded in. The Morrison influence extends further with concepts from his own title Frankenstein appearing in the form of SHADE and it's leader Father Time.