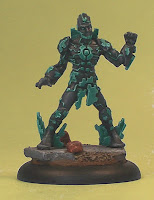 I have published a few tactics summaries on the Pulp City Forum, but thought they may be useful posted here as well. I will group them under the umbrella label of 'Tactica' (a nod to my past in the hobby being very WH40K-centric).

BRIEF: Vector requires some thought to use; he is no ‘fire and forget’ Supreme, instead his abilities are all about team-working, and move and fire activations.

POWERS: Equipped with a couple of offensive Actions, a Defensive Action and another Action intended to manage his unique Resource(s), Vector arguably lacks some of the breadth that a few other Supremes can bring to bear.

Digital Blasters is a nice and cheap ranged attack, which can be boosted by combining multiple Digital Blasters. The default condition is two available per round, for a combined RNG 12 attack. Combined Digital Blasters and a Blink Move* give a ENERGY 5 attack, with the option of Power-Up and most importantly a threat range of 16 inches – nothing to be dismissed lightly.

Digital Shield is a limited defense and buff, forcing Vector to use a Pixel to benefit from only minor gains. Since Pixels should be used as effectively as possible, I don’t see this as the most beneficial use of a Pixel, except when Vector is isolated.

Pixels, Combine! allows Vector to replace pixels with Megapixel, at only the cost of an activation and no AP. So if you like using Mega Pixel, not a bad option.

Digital Knife is effectively an ENERGY-based Strike, with a useful boost. A cheap Base to Base attack option, especially if hanging in base to base until the next round (effectively the cost of Digital Knife can be seen to be balanced by the 1 point AP allowance gain). Rolling that 6 means a more vulnerable enemy for friendly models to attack (consider the net benefit if that enemy model is stacked with Pixels).

Skills – Blink and Annoying mean Vector is hard to pin down and thankfully has reduced vulnerability to charges, since he can quickly and freely move away from Base to Base with sufficient AP and actions available; try not to do this until after the calculation of the AP pool, so therefore in Vector’s first activation of the following round where it is not too dangerous to wait to do so. Cyberhead means he can be a cheap option for Mechanical Minion control (Sentry Bots, Advanced Sentry Bots, BOOM Mechanical Minions), since he can manage them from anywhere on the battlefield. Obviously Immune/MIND offers some limited protection against certain actions.

Team Power - Glitch: is largely about hindrance for Vector, basically changing the way he plays compared to most other Supremes in small ways. Thus players need to get used to the lack of STRENGTH and Strikes, as well as not worrying too much when in Base to Base with enemy models (but recognizing he only has 9 damage points and fairly mediocre-to-average defensive traits, and no defensive Trumps).

Pixels are great – a renewable Resource that only costs AP. They are useful for stacking bonuses to target specific enemies (my preferred use), as well as having the option to be burned up to negate some Damage if attached to a friendly Supreme (think about the vulnerable guys you want to keep around longer, or the bricks/tanks being dropped among enemies; the Six Feet Under bomb could be made more durable with Pixels attached to Six Feet Under). Unless equipped with Self Blasts or non-Friendly affecting Blasts or similar options, enemies swamped with Pixels will waste AP and activations to get rid of the Pixels stacked on them. Follow that up with a Powered-Up attack against the same enemy and some devastating attacks can be unleashed. Vector needs to be within 6 inches of enemies to target them with Pixels, so care needs to be used that he isn’t left too exposed as a result. Since gaining the bonus to Opposed Rolls against enemy models doesn’t burn up Pixels (and therefore Vector’s future AP), then that is my favored mode of use.
Mega Pixel – offers an attack or AP allowance drain against targets with weak-to-average DEFENSE. Since Energy Harvest Eliminates the Mega Pixel (and the 3 AP invested previously), and the Energy Strike is at ENERGY 5, and requires an activation by Vector to bring it into play, then I favor keeping Pixels rather than going for their ‘big brother’. Of course if one enemy model is too much to handle otherwise, then Energy Harvest may be a viable option to limit their utility, but consider that unless the target has a particularly low DEFENSE, then the AP reduction is probably going to be limited.

WEAKNESSES: Vector has a few key weaknesses. Firstly he has no STRENGTH Trait, so cannot make Strikes (although this is balanced by his Digital Blasters and Digital Knife abilities). Secondly he has one of the smallest AP allowances in the game, except when he is in base to base with an enemy – a balanced weakness of sorts, since his actions are all either very cheap or in fact free. To gain the AP boost requires being in base to base with an enemy, which means surviving charges (easier thanks to Annoying) based on fairly average DEFENSE and Damage. Thirdly, Digital Shield requires a friendly Model to be in Base to Base to work effectively, meaning bunched models for enemy Blast, Ray and Self Blast attacks.


SYNERGIES: Vector is all about synergies and buffs – both providing them, and benefiting from them also. Any friendly model can benefit from attacking enemies beset by Pixels. Ace of Wraiths Jack of Shadows action is ideal for Vector; he gains Spectral without losing anything since he has no STRENGTH actions to use. C.O.R.E.’s Omnipotent combines with Digital Blasters to create an attack that can both damage at long range (16 inches threat range) as well as reducing AP allowance. Iron Train can use Free Ride to place Vector in a more favorable position; for example Vector can be placed in cover from Iron Train, especially if due to his limited AP Vector would be vulnerable. Twilight makes a useful close companion as both Supremes have the Annoying and Blink combination of skills, and Vector would benefit from the +1 to all Opposed Rolls from Shadowzone.
Posted by pulpcitizen at 08:52