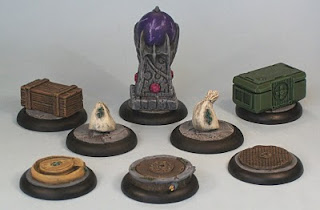 With the build-up to the release of the Pulp City rulebook, I thought it was high time I got around to making sure I had some nice objective markers to go with my minis and terrain. I am happy that I have enough Supremes and scenery for them to game in and around for the time being, so I need to work on more Minions and especially objective markers (Tokens). They are not really magical, of course...(I just love a pun, good or bad)...

The first Tokens I have completed represent goals for Agendas and Resource markers. The first selection of completed Tokens are (click on the pictures for larger images):

Manholes – 2 Tokens; one of the Tokens is from a bunch of resin bits kindly supplied by Pulp Monsters as a sales promotion last year if I remember correctly, the other is the Solar base from MaxMini, with a little removal of extraneous details.

Weapons Crate (A.R.C. only) – made using a Fenris crate mounted on a Dragon Forge base, and needed as my main opponent loves using Howler; Dragon Forge and Fenris - two of my favourite manufacturers working in harmony!

Teleport Anchor – this was another of the resin bits from Pulp Monsters. It may double up as a simple objective Token.

Loot – 2 Tokens; again, resin bits from Pulp Monsters, previously painted but newly mounted on bases; mounted on each of a Dragon Forge and Fenris base.

Crate – probably an objective Token; painted a while ago and then based as I was doing the others, the crate was a freebie when I placed an online minis order, so I don’t know the source of it; base by Fenris.

Altar/Place of Power – this will probably serve as an objective Token; from Ral Partha Europe (from a pack of 3 pieces), the item was painted a while ago to serve for anything from Conan to fantasy to superhero games, so I based it this week (Fenris base) to serve as a Token.


There are more Tokens I am working on, and I will post them as and when they are finished. The 30mm bases I have used are ‘Concrete’ (Dragon Forge) and ‘DS Military Industrial Complex’ (Fenris Games), as well as the ‘Solar’ base (MaxMini).
Posted by pulpcitizen at 07:53