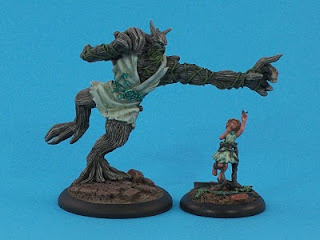 Just some pictures of minis that are very much intended to work together. They don't have to be fielded as duos, but in each pair not doing so limits the effectiveness of whichever models are used. 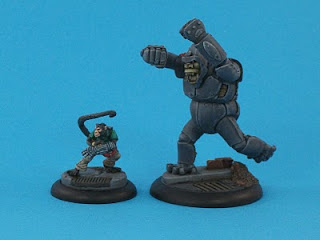 Apebot and Virus - these two are probably even more closely entwined thatn Father Oak and Acorn. Virus has only Actions intended to boost/buff Apebot's capablities. Take The Glove (Device) and Virus gains a limited form of attack capablity (only against Mechanical), as well as a better version of one of his Actions (allowing him to reactivate an Incapacitated Apebot using the Fix: Repair Action). Like Father Oak without Acorn, Apebot can probably manage better alone than with his natural partner, but due to the boosts Virus offers, it really only makes sense to take both.

Of course what this means is that much more than most cases of Team-building, the paired Supremes need some good thought about how to get the best out of them when co-ordinating their Actions.
Posted by pulpcitizen at 05:52