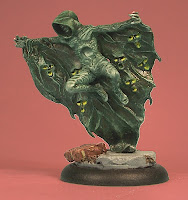 I love Mourn, I really do – he was one of the first Pulp City minis I finished painting; so I enjoyed trying to construct a tactica for him.

BRIEF: Mourn has some expensive Actions relative to his AP Allowance. This means he has to be used judiciously to be effective. If used without care his mediocre Damage and lack of defensive Trumps or Skills (except for Flight) mean he is not going to stay around for long if targeted.

POWERS: Mourn has a nice variety of combat abilities, offering a degree of attack utility not all Level 1’s have. All of his Exclusive Actions play off his Trump (MIND), which compensates for his fairly average-at-best Traits.

Screams of the Dead is a limited-range basic Ray attack. It isn’t cheap (using half his AP), so be mindful of Mourn’s positioning after the Action, because if he Moves* then uses the Action, he will be vulnerable to counter-charge from any survivors. However, given that it targets SPIRIT, then undoubtedly a good potential victim will present themselves from time to time. Be careful about using it with Power-Up as that may ensure Mourn is left exposed for the remainder of the Game Round.

Ssshred Them!* is the real anti-Science option that Mourn has, but it needs to be used carefully. Mourn has to combine it with another Action (Screams will work, but leaves Mourn just as exposed as using Strike), which means he needs to be in the right place at the right time – plan ahead. Because of his AP Allowance Mourn will either need to be moved by another model or in the previous Round, or need to have a target come near to him if using the Ssshred Them!*/ Screams of the Dead combo. Successfully stack it with Screams of the Dead and suddenly Mourn has a devastating attack (effectively 9+d6 result) against the right target – Heavy Metal beware, as well as the likes of Apebot. Only Science Supremes like Dead Eye are likely to weather the Ssshred Them!*/ Screams of the Dead combo.

Banshee Wail is great for battlefield control, if timed right. To use it effectively it arguably should deny more AP Allowance than it costs, or should prevent use of specific Actions, so it will need to be used against low SPIRIT models or a sufficiently clustered group of enemies without too high SPIRIT. Since friendly models are affected, Mourn needs to be moved away from allies, meaning he will probably be vulnerable unless he can combine it with a Move*.

Sssuffer! is Mourn’s pre-emptive revenge tactic; use it when it looks like he would go down imminently to maximize his removal. If it would be likely that he would be taken out by a forthcoming action, then there is no loss in leaving him without actions and on 1 damage if he has enough enemies around him. Ideally used against clustered enemies of course.

Team Power – The Laughter of the Dead: like Sssuffer! this is basically another ‘revenge’ power, enhancing his battlefield control capability. The Team Power mitigates to a degree the fact that Mourn’s actions will often leave him exposed and therefore vulnerable; if he is taken out he will damage Living models within 4 inches.

Soul Trap – Mourn’s non-exclusive Resource offers a neat solution to those few durable models with Regeneration and/or First Aid Kits. Tempting to use against Six Feet Under, but don’t forget the latter has SPIRIT as a Trump also.

WEAKNESSES: Mourn has a few key weaknesses. Firstly some of his abilities are best suited to operating at least 4 inches from friendly models, or away from Living friendly models at any rate. His Traits are fairly average, and his Damage is mediocre, and lacking defensive skills means he is not going to hang around long if used effectively. Also, don’t forget Mourn cannot be used for Starting Rolls despite his encouraging MIND Trait. Due to his AP Allowance and the high cost of his actions, Mourn is unlikely to Power-Up often, so most of the time players will need to use his attacks basing their decisions on expected results of 5-10, or 10-15 for the Ssshred Them!*/ Screams of the Dead combo (which uses his full AP Allowance). Trump can mitigate this to an extent of course.

SYNERGIES: Mourn has some unique synergy requirements. He works best alongside Non-Living models, but is arguably best operating alone. Level 2 Sanguine could accompany him fairly safely (think about overlapping Horror from Sanguine with a follow-up Sssuffer!), and Boreas could use Wind Blast (from Elemental Mastery) to ‘push’ Mourn into a useful position to manage Mourn’s AP limits.
Posted by pulpcitizen at 07:23